The workforce is changing. Not only is the future is female, but we should be reminded that the present is also female. This was most exemplified at our office during our “Creative Women, Creative Leadership” event for San Francisco Design Week.

With an incredible amount of initiatives in place for women to prosper and grow including Wall Street’s Ellevate, Sheryl Sandberg’s Lean In, and the millennial-focused Girl Boss network, there is a shift in the representation of women in the workforce. The boardroom is becoming more diverse and inclusive.

With these conversations around gender equality becoming commonplace, it is no surprise that the ‘Creative Women, Creative Leadership’ event was sold out with over 150 women and male allies ready for a night of informative discussions. 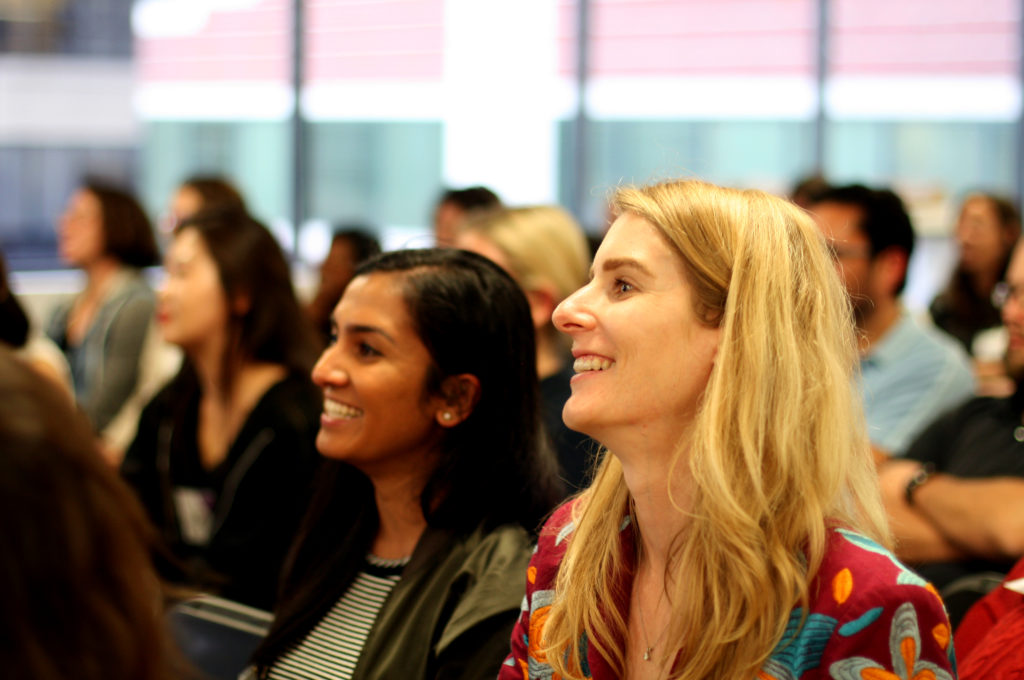 The panel was comprised of four incredible women who have a range of experience and approach in their career spanning from Gen Z to Baby Boomer generation – which always provides a wide knowledge base of insights and intellect.

Take The Space. As an athlete and ski and soccer coach – including for athletes bound for the Olympics – Cindy brought to life her personal experience of five principles that attendees could apply to their own career paths.

This approach resonated with many in the audience as her experience in sports is easily translatable to career. With a creative slide presentation utilizing soccer moves like the timing of movement, positioning, checking the runs, her point to take the space in work instead of the soccer field had a significant impact on the audience. It is only magical timing that her presentation coincides with the US Women’s soccer team winning the World Cup that sent a message to the global audience that taking up space and fighting for equal pay is a cause to champion. 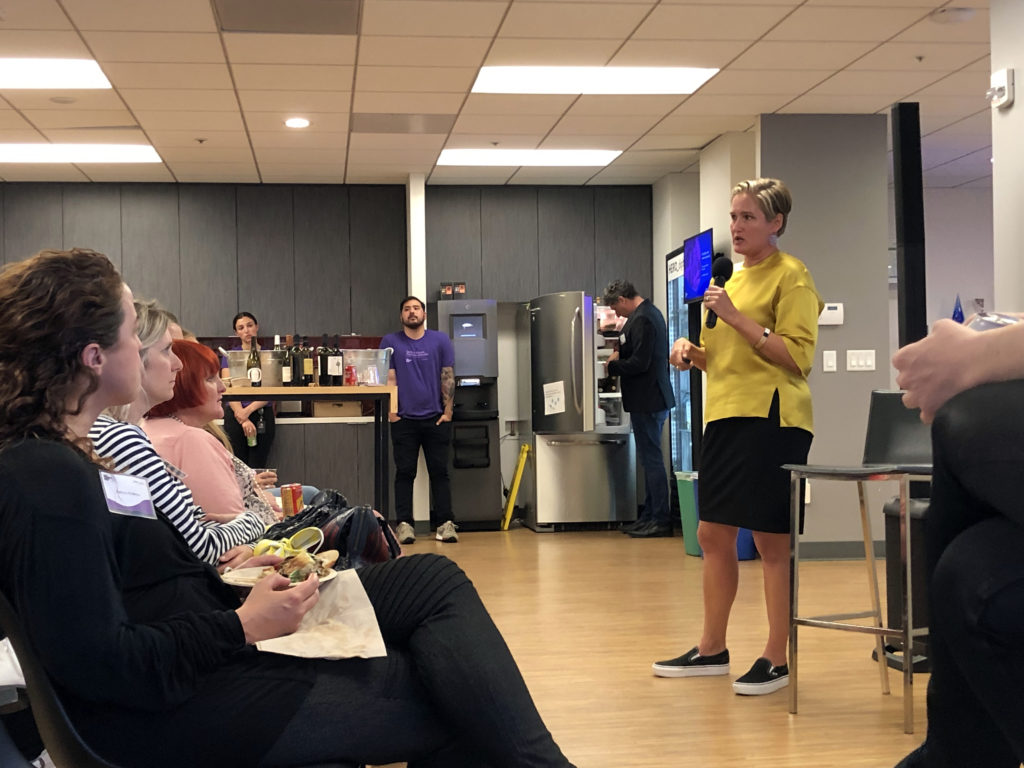 Find The Advocate. As most have encountered in their career, finding an advocate can be extraordinarily impactful for their career growth. Gianna focused on this for her talk. She is passionate about the importance of finding a great mentor and being a strong and faithful advocate to others. She illustrated to the audience how in her past she’s encountered people who have served as her advocate, as well as, managers who did not.

As you can imagine, the ones who weren’t good advocates didn’t champion for her and even represented her work as their own or simply omitted her from credit. This was detrimental to her growth. Those that did advocate for her helped her get opportunities, promotions, and recognition for her hard work. Seeing the two sides of managers led her to want to make a change for her colleagues and peers.

This sparked many questions from the audience about how to ask for advocacy or what to do when it isn’t forthcoming, and many participants sought Gianna out during the networking time. 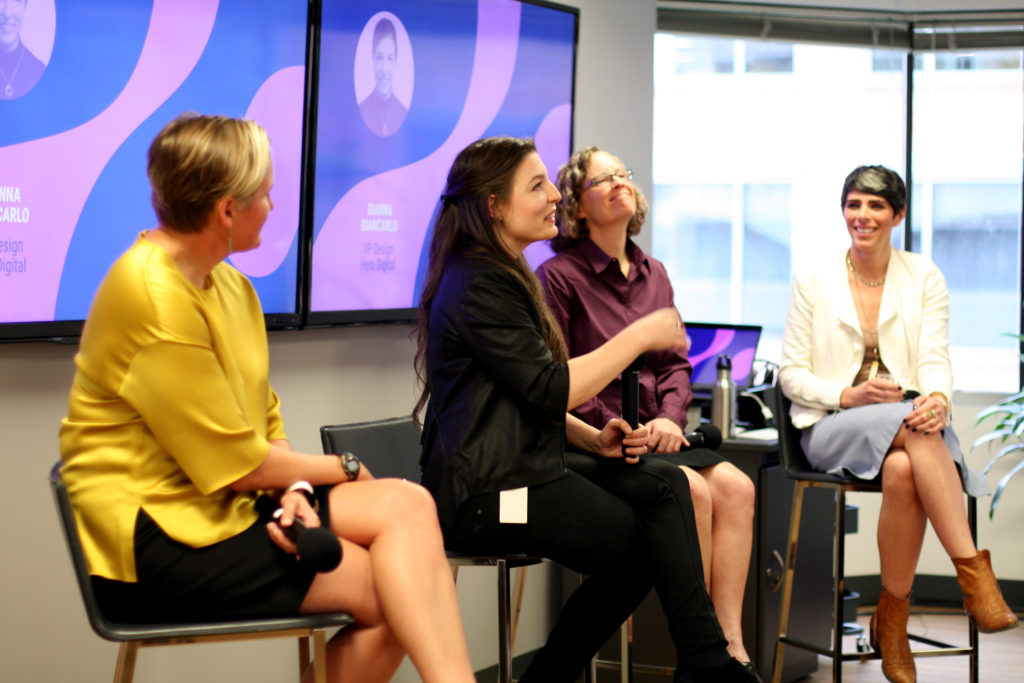 Careful Listening. Next was Indi who spoke about her work uncovering unintentional biases impacting women (and others) in the workplace. She emphasized the practice of careful listening to learn how our language is not just hurting feelings but limits the potential of individuals and communities. Instead of a solution-based talk, this was more focused on the nature of the problem. She included a participatory exercise of raising a hand when audience members have experienced a type of situation.

Karen Newman, Director, Program Management at Hero Digital recounts this exercise, “Indi’s request for each of us to pause and reflect on how our perception of ourselves and others impacts our actions was profound. For example, when she asked ‘How many of you feel like you’ve got it all together?’ only one person raised her hand.”

This moment was a reflection of pause and it allowed for all to be mindful of our language and interactions in a world full of variety – with the hopes that with careful listening and speaking will lead to change and understanding. 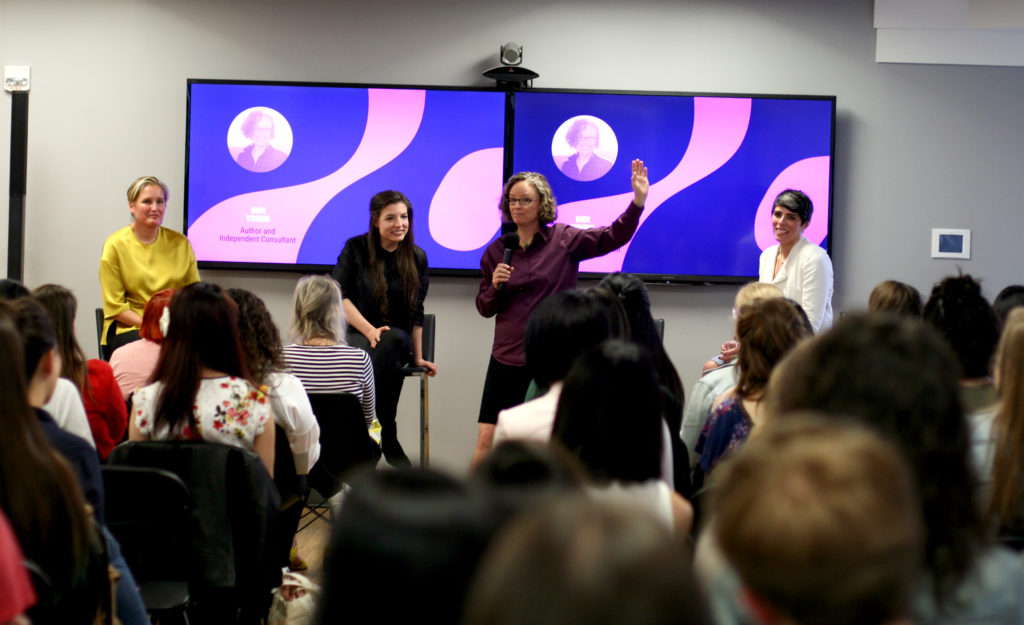 Alaina Shearer, founder of Together Digital

Overcome Challenges. Last but certainly not least, Alaina delivered an animated speech that had the crowd engaged. She shared several stories about her past experiences with workplace discrimination. The stories she shared were pretty egregious; however, she managed to focus on overcoming them and finding personal direction. She has not been afraid to tackle problems head-on and has repeatedly refused to settle for the gender stereotyped box she’s been asked to fit into.

These included her time working in broadcast radio which apparently has a personality pattern called “the dick, the doofus, and the deer.” She was hired to play the deer but was very candid and outspoken about her topics. Eventually, they gave her a script and muted her microphone until it was her appointed time to talk. Leaving that she’s had managers come onto her and HR powerless to do anything despite it being a slam dunk of a case.

Finally, she found her sweet spot and started her own successful agency. To scale, she experimented with hiring on male sales leaders. She was frustrated that while the business skyrocketed, clients would only really talk to the man when it was Alaina who was the brains.

Eventually, she was enraged enough to take on the challenge on behalf of all women and started an organization called Women in Digital; and for legal reasons renamed it TogetherDigital. She holds participatory workshops at chapters around the country, and we were treated to one during the networking time. 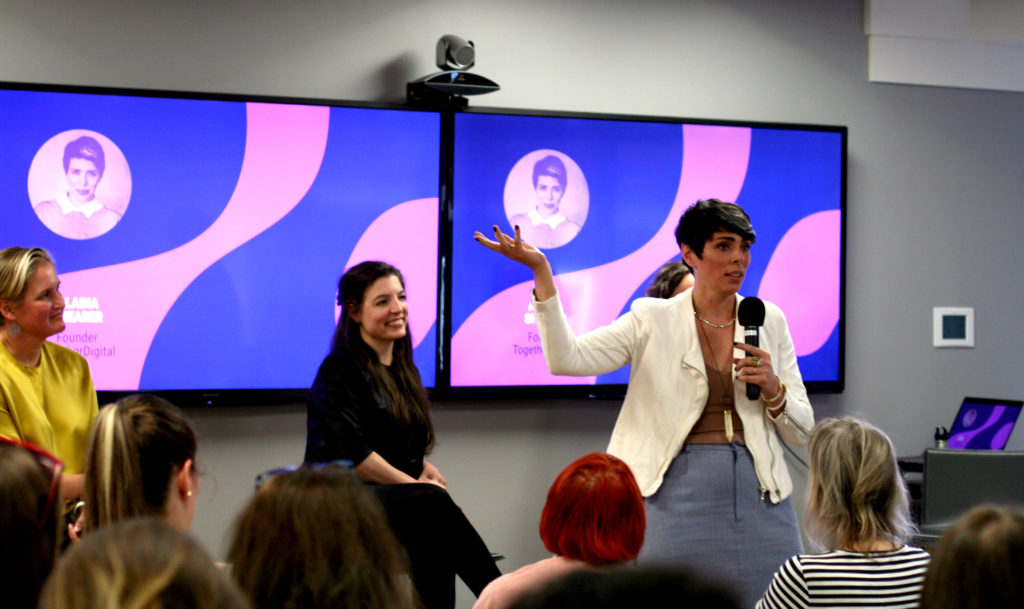 To end the night, Hero Digital Executive Creative Director, Todd Zerger, moderated questions of his own and from the audience, and Hero Digital CTO Tony Rems presented about the history of wine and our selection of twelve wines from around the world – all from wineries that are owned or run by women for women to thrive.

Zerger reflects on his time at the event: “As I wandered around, people were sharing stories and laughter, serious faces of support, and of course LinkedIn information. During this time, Alaina started an exercise she calls “Ask and Give” in which the participants ask for and give support. I listened to a woman who felt she was ready for a promotion but lacked the confidence to pursue it assertively. The assembled group of women were all sharing their personal stories and encouraging her.

In the end, she was almost tearful saying that she was still scared but mostly because she now knew that she was going to ask and champion her own cause. It was pretty humbling because I don’t think men support each other in this way. Women’s solidarity is a powerful advantage that seems to be starting to pay off despite the institutionalized biases that have been in effect for so long.”

Overall, we were thrilled to host an incredible night of changemakers that will have an impact within the workplace, and we are looking forward to more amazing conversations that will change the ratio and create a more gender equal workplace.

Learn more about how we support diversity & inclusion or apply to join our team.